This winter, we jetted off to Costa Rica for a few days to celebrate my husband’s milestone birthday. It was our third trip to CR and the first that wasn’t a hiking trip. Previously, we had visited the Arenal rainforest in 2013 and the cloud forest in 2017. This time, we chose to have a beach experience and spent a few days around Tamarindo on the Pacific coast to soak up the sun and sea.

Getting to Costa Rica

San Jose (SJO) is Costa Rica’s biggest airport and offers a flexible schedule of flights. Liberia (LIR) airport is actually closer to Pacific coast, but it’s a much smaller airport in a much smaller city. We flew into LIR the first time we visited CR and it was fine but not fabulous. SJO definitely has more services and the city of San Jose is worth the time to stop and explore.

The one thing that bit us in the behind this time was the long customs and immigration line. Upon arrival, it took us about two and a half hours to leave SJO. There are two bottlenecks; the first is the customs line and the second is the luggage scan after you get your bags but before you are allowed to physically leave the airport. It seems that all of the morning flights arrive at the same time and the airport gets slammed. Plan accordingly.

We don’t always go for the touristy experience like one finds in typical beach towns like Tamarindo – the constant noise and the crowds are just too much. We split the difference and stayed at the Vida Verde Guesthouse in Playa Avellana, which was close enough to drive to Tamarindo but far enough away that all you could hear at night were the monkeys in the trees.

The drive to the Tamarindo area from SJO is about four hours. It was late afternoon by the time we landed, got through customs, got our bags, went through baggage scanning, and got our rental car to start the drive. Luckily, the owners of Vida Verde Guesthouse are French chefs and dinner would be waiting for us. (Seriously, if you are planning to stay in this area of CR, look up Vida Verde on AirBnB. Camille and Pascal are awesome.)

Lola’s On the Beach

Playa Avellana is a smaller local beach known for its waves and it attracts surfers from around the world. Lola’s is a restaurant and bar that plays a prominent role on the beach. They opened in 1998 and have been climate neutral since the beginning. They don’t use plastic straws, bottles, or take-out containers.

Lola’s is named after the original beach pig. Today, Lolita freely roams the beachfront around Lola’s. I was able to chat with Lola and Lolita’s mom, and she is very hands-on with the business as well as with Lolita.

It was amazing to spend an afternoon hanging out at Lola’s – eating organic veggies and fresh ceviche, watching Lolita roam the beach, and waiting for sunset.

Our other, more adventurous events for the trip were scheduled for my husband’s birthday day. We started the day on land on an ATV tour and ended the day at sea on a sunset catamaran tour. We booked both tours through Iguana Surf Shop in Tamarindo, who was the middle man/booking agent for the tour operators.

We were picked up in Tamarindo for the ATV tour by Arenas Blancas Tours and driven to their offices in Brasilito. It wasn’t clear on the booking whether we would each drive an ATV or whether we’d double up. I was happy to find out that we would each get our own ATV.

It was the first time that I had ever driven an ATV and it was so fun! And totally easy to drive. Our guide, Rigo, took us on dirt roads and a short stint on a main road to several vistas and beaches in the area. Two hours on the ATVs flew by in a flash. 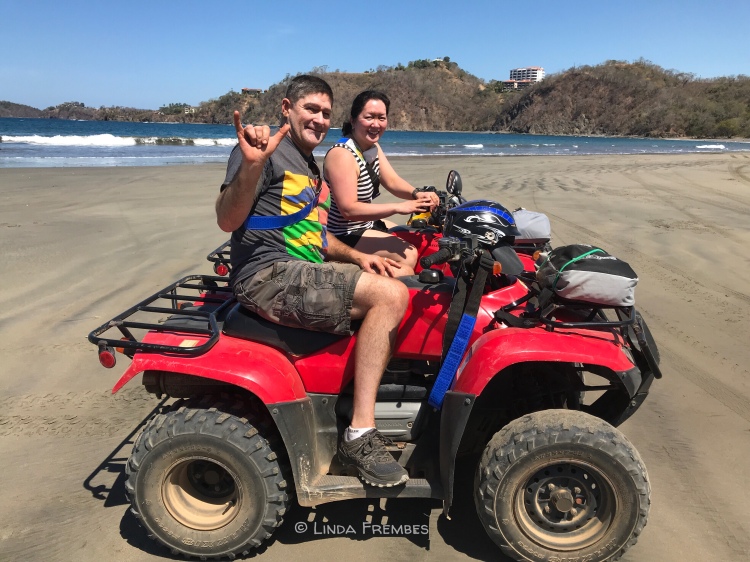 We were back in Tamarindo by Noon, where we had some time to grab a snack before setting off on the catamaran tour operated by Marlin del Rey. The pickup point wasn’t very clear and we realized why it was so confusing – it was literally a spot on the beach where Marlin del Rey had parked their vehicle on the beach. The directions said to meet in front of El Pescador and “although the restaurant doesn’t exist anymore, most locals know where it is.”

My Occam’s Razor piece of advice: Look for the Marlin del Rey truck on the beach instead of trying to find a restaurant that no longer exists. 🙂

The agenda for the catamaran tour was pretty standard: sail for an hour, stop for food and some snorkeling, and sail back. It was a great time on the water and the boat was large enough that each group could have their own space.

The best part of the trip was, of course, seeing the sunset from the boat.

We spent our final night in Costa Rica in Jaco, another beach town. It’s only about two hours from the airport. We had spent some time in San Jose on a previous trip and wanted to see another part of the country.

Vista Guapa Surf Camp is located just outside of the busy Jaco commercial area. There are three cabins on a small mountain that have amazing views for sunrise and sunset. Candace and Dave, who manage the property and who offer surf lessons, were so accommodating and nice. I highly recommend this stay and would go back to stay here again.

Some 360-degree Images from the Trip

This site uses Akismet to reduce spam. Learn how your comment data is processed.